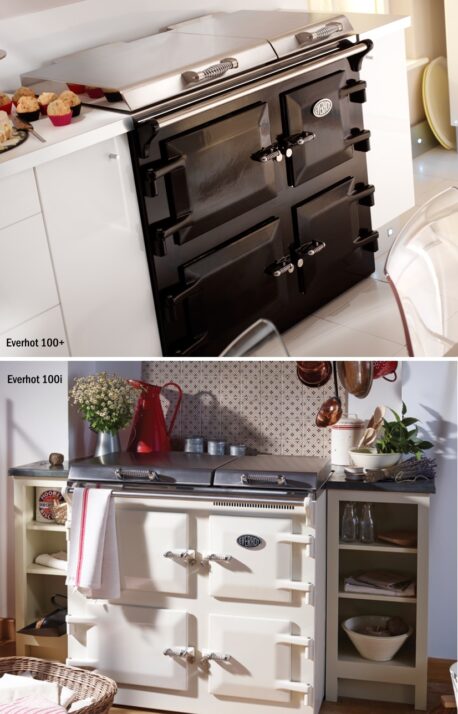 There’s much to love about the beautifully engineered and elegant Everhot 100 Series, and you have two options to choose from: the Everhot 100+ or Everhot 100i.

The attractive and balanced four cast iron door configuration conceals one oven for roasting, another for baking/casseroles and the third is a useful plate warming oven. The fourth door reveals the controls. Under the easy-lift lids are cast iron hot and simmer plates which provide ample cooking surfaces, and the integral grill is incredibly useful in the busy kitchen.
Watch Demo Video

Everhot Cooker Demonstration Days
Are you considering purchasing a new Everhot Range Cooker?  Join our next  Demonstration Day and watch our expert Chef, David Pengelly, create tasty dishes with our fabulous Everhot 100i  Range Cooker.  David demonstrates all there is to love about these efficient and attractive electric cookers.

1 Hour Pre-booked individual appointments only.  Enjoy up to 1 hour with our Chef David Pengelly as he demonstrates all you need to know about cooking and owning an Everhot Range Cooker.

The Everhot 100+
The Everhot 100+ has a useful additional cast iron simmer plate concealed under the second, right hand lid. On a day-to-day basis, you may choose to leave it switched off, but for the occasional day when you have a houseful, or if your kitchen needs extra heat throughout the winter months, it will be invaluable. The warming oven on this model is behind the top right door.

The Everhot 100i
The Everhot 100i is equipped with a two zone induction hob, fitted neatly under the second lid. With fingertip controls and incredible speed and control, it is an essential modern addition to your classic range cooker. The warming oven on this model is behind the bottom right door.

The EVERHOT 100 has all the traditional style of a classic range cooker; its four cast iron doors provide a beautifully balanced appliance which forms the centrepiece of any kitchen. Behind the doors lie three ovens, on the left hand side roasting and casserole ovens, whilst behind the third lies a useful plate-warming oven. The final door conceals all the controls necessary to run the cooker. The 100+ incorporates an additional cast iron simmer plate underneath its own lid.

Background Heat: The EVERHOT is a heat storage range cooker that will provide gentle heat into your kitchen.

Flue free: Because it runs on electricity, the EVERHOT needs no flue. Again, this makes installation easy, and also reduces energy consumption.

Energy saving: With its unique, energy saving design, the EVERHOT has extremely low electricity requirements, so you can simply plug it into a 13amp socket just like an electric kettle. Many owners have praised its ‘miserly consumption’.

We are pleased to announce that all cookers ordered after April 1st will be delivered with our new oven delay timer, an enhanced feature of the ECO setting.

This feature introduces more flexibility to the cooker control, the hot plate and ovens can be individually timed and heat up separately rather than all at the same time. The hot plate will be ready for the obligatory morning coffee and rounds of toast while the oven delay feature allows the heat up of the ovens to be delayed by up to 12 hours and can be set individually for each day of the week.

A 3 hour delay will be standard on our factory ECO timed setting however for customers wishing to have all cooking zones heating at the same time they can simply choose no delay.

In addition to the added flexibility and potential reduction in running costs this feature further enhances our compatibility with renewables as it reduces the peak load during heat up, perfect for customers with solar panels.

Total control: Each oven and heating surface can be independently adjusted to the temperature you require. If a particular cooking area is not needed for long periods, you can switch it off or turn it down without affecting the other areas. The optional induction hob is incredibly efficient and having bought food to the boil incredibly quickly, is very simple to control at a simmer temperature. And on hot summer days, you don’t have to roast in the kitchen. The ECO control is also available to provide enhanced economy and reduced heat output in hot weather.

Grill: The EVERHOT 100 contains a large radiant heat grill in the top oven, this can also be used to rapidly boost oven temperature. Other comparable ranges just don’t provide grills.

Maintenance-free: With a little care and affection, the EVERHOT will perform trouble-free year after year, with no annual servicing requirement (unlike other ranges).

Environmentally friendly: Due to the EVERHOT being so energy efficient in it’s running consumption it maintains its status as being a more environmentally friendly choice of cooker. You should consider your EVERHOT to be a lifetime purchase and indeed it will give many decades of use, but if you or a succeeding owner decide that you want to dispose of it we will remove it from your property free of charge and recycle it.

A carefully selected colour range offers you abundant choice for you kitchen. From understated Black, dark Blue or Green to rich Burgundy or cool Cream and Graphite, there’s a colour for every kitchen theme. Whatever your choice, the Everhot will always be the star presence in your kitchen.

NB: Due to the digital publication process – actual colours may vary.